A new approach to elections in Palestine

When the legislative elections do take place, Palestinians should vote to reject the status quo 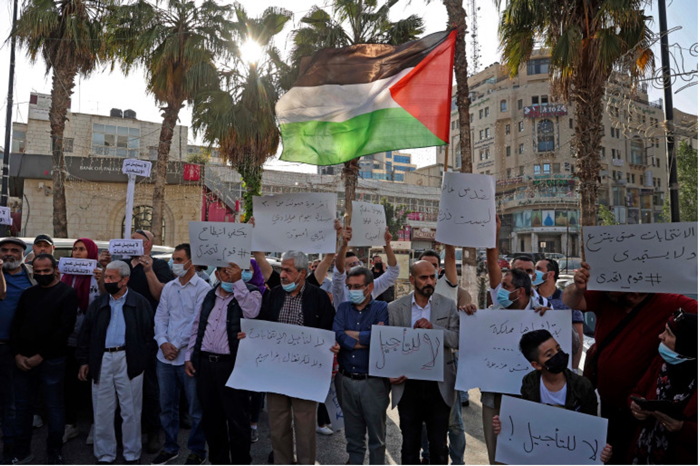 Palestinians demonstrate in the centre of the city of Ramallah in the occupied West Bank on April 28, 2021 against any postponement of the Palestinian parliamentary and presidential elections [AFP/Abbas Momani]

Before Palestinian President Mahmoud Abbas postponed the Palestinian legislative elections, some observers thought that there would be fierce electoral competition that could lead to political change. Others argued that elections are the only way to achieve national unity and end the Palestinian internal rift between Fatah and Hamas, the two dominant political movements in Palestine.

But a closer look at what was going on in the electoral race betrays a different reality. The election was more likely to produce a “shamocracy” that would maintain the deep-rooted structures of oppression, tyranny and fragmentation.

This is because the two political forces that have dominated the Palestinian political scene over the past 15 years and are vying for power again, have inflicted severe damage on the Palestinian national movement, depleted the national liberation project, and exacerbated vertical and horizontal fragmentation within the Palestinian society.

As a result, over the decades, Palestinians have become mere observers of their plight and cause, unable to participate in political developments in their own communities. Indeed, their feeling of alienation in their homeland and estrangement from their government is a form of oppression tantamount to that inflicted by the Israeli colonial occupation. Palestinians need a government that liberates rather than enslaves them.

When the elections are eventually rescheduled, Fatah and Hamas will once again try to monopolise the vote. The worst the Palestinian electorate could do is give them legitimacy again by voting for their candidates. This would only strengthen their positions and reinforce their authoritarianism, leaving Palestinians in their current predicament for years to come.

But this is not an inevitable outcome. The elections, despite all their fundamental shortcomings, can still be an opportunity to transform the Palestinian political system, if approached differently.

Political forces who desire genuine change in Palestinian politics should seek to steer the Palestinian public away from the disastrous choice of the status quo. They can encourage voters to punish the two dominant political powers and make space for the emergence of new political leadership.

This would be the first step to holding them accountable at the grassroots level for undermining the Palestinian struggle. The punishment drive does not necessarily require that Palestinians vote for other lists in the elections.

To demonstrate their rejection of the status quo, they can just cast invalid ballots that read “neither Fatah, nor Hamas”, “no to a pathetic political regime”, “no to corruption”, or “no to division”. With such no-confidence votes, opposition voices can consolidate in an act of resistance to expose ruling authorities and parties and send a clear message: “enough messing with our national project and future”. This would also constitute a fundamental rejection of the Oslo Accords framework and the political and governance regimes it created.

Rejectionist, confrontational, and collective action requires exposing the authorities before the masses as a precondition for change. This electoral process can be used to pinpoint to the public the failings of the governing regime that they suffer from. It is an opportunity to change the people’s attitudes and perceptions, which will necessarily lead, sooner or later, to a change in their actions.

For example, both Fatah and Hamas in their electoral campaigns are promoting themselves as the “protectors of the Palestinian national project” using either the “state-building” discourse or the “resistance” rhetoric. This is the time to expose both the fallacy of the “national project protector” notion, as it serves only as a pathetic coverup for all the damage and harm that both movements have inflicted on the Palestinians.

If a significant number decide to vote “no” to the status quo and cast invalid ballots as a statement of their unequivocal rejection of the current regime, we would arrive at a critical juncture in Palestinian politics. A new and effective Palestinian leadership could exploit it to advance reforms and start developing an inclusive, progressive, and emancipatory Palestinian political system.

There is already some political work done that could help a new Palestinian political class emerge, unburdened by partisan affiliations or dependencies.

For example, there is the Generation for Democratic Renewal, a youth-led organisation founded in February this year, which focuses on rebuilding the Palestinian political system on a democratic foundation. The group cannot contest the elections because of various legal restrictions so it has launched instead a virtual parliamentary list of young Palestinians who are putting forward a progressive political agenda.

Following Abbas’s announcement on the postponement of the elections, the youth-led group declared that it will continue with their initiative, aimed to be an “exercise in how democracy and political participation should be”.

The Generation for Democratic Renewal is not the first youth-led democracy-focused initiative. It was preceded by a few others, which emerged during the Arab uprisings in 2011-12, such as Palestinians for Dignity.